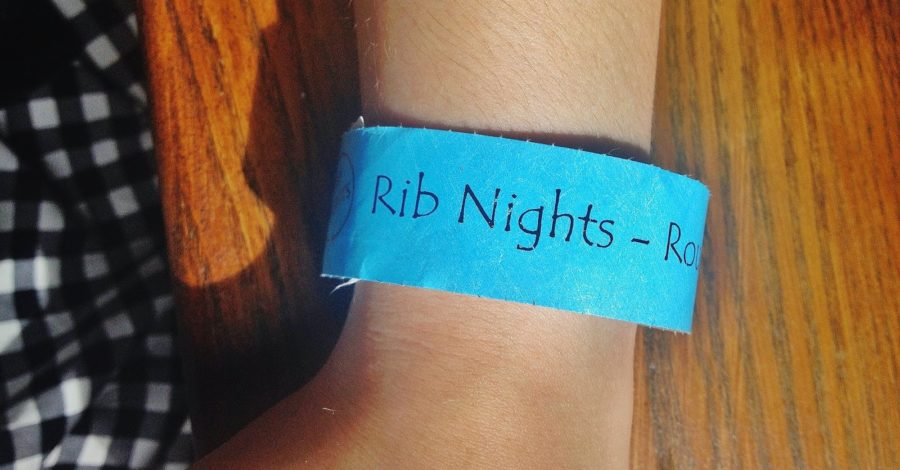 70 hungry diners sitting on mismatched chairs, drum-rolling on the tables and shotting glasses of whisky. It has to be said, it kind of had a lunatic feel about it. But God, did I love it. It was only when the room at The Church Inn  flowed with cocktails and beer, that the room erupted with a collective bellow of  ‘RIB NIGHTS!‘ to encourage chefs who were cooking up a storm on the roof. Owing to the fact that 70% of the tickets to round 4 sold out in less than an hour – we all knew we were in for a bloody good treat!

The Rib Night event is Ahmed Kage’s baby, and he puts in countless hours into making sure each and every guest is looked after and catered to. I only found out about this masterpiece a couple of weeks ago and I am definitely sorry I didn’t find out about it sooner. The initial aim is for two separate BBQ teams to battle it out & produce the most tastiest ribs you’ll possibly ever put into your mouth. At the end of the meal, you vote for who you think served the tastiest food. Simple. 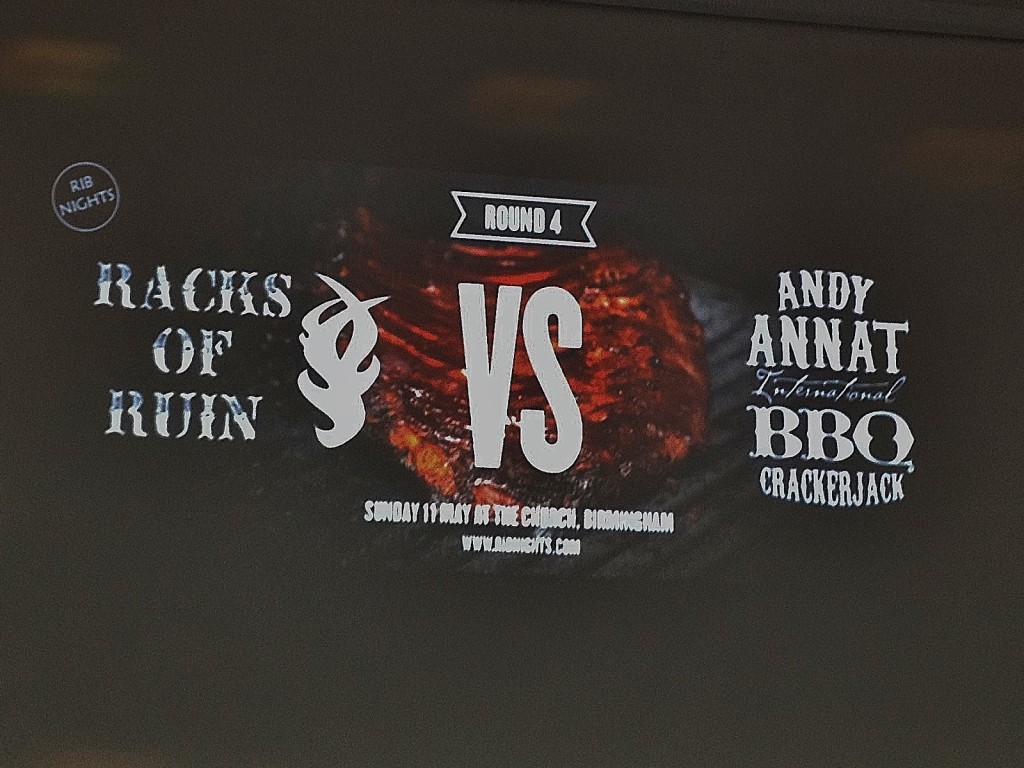 The big twist is that you don’t know which team has cooked which ribs. When the food is finally delivered to your table, each portion is labelled with a cocktail stick and a flag as either ‘Team A’ & ‘Team B’. It is from here that you use only your taste buds to choose a winner. Today, Team A’s ribs were dark and smoky, delivering a more ‘woody’ taste to the ribs, whereas Team B cooked theirs perfectly and were succulent enough to just fall straight off the bone. It took me around a minute to straight away decide a winner. 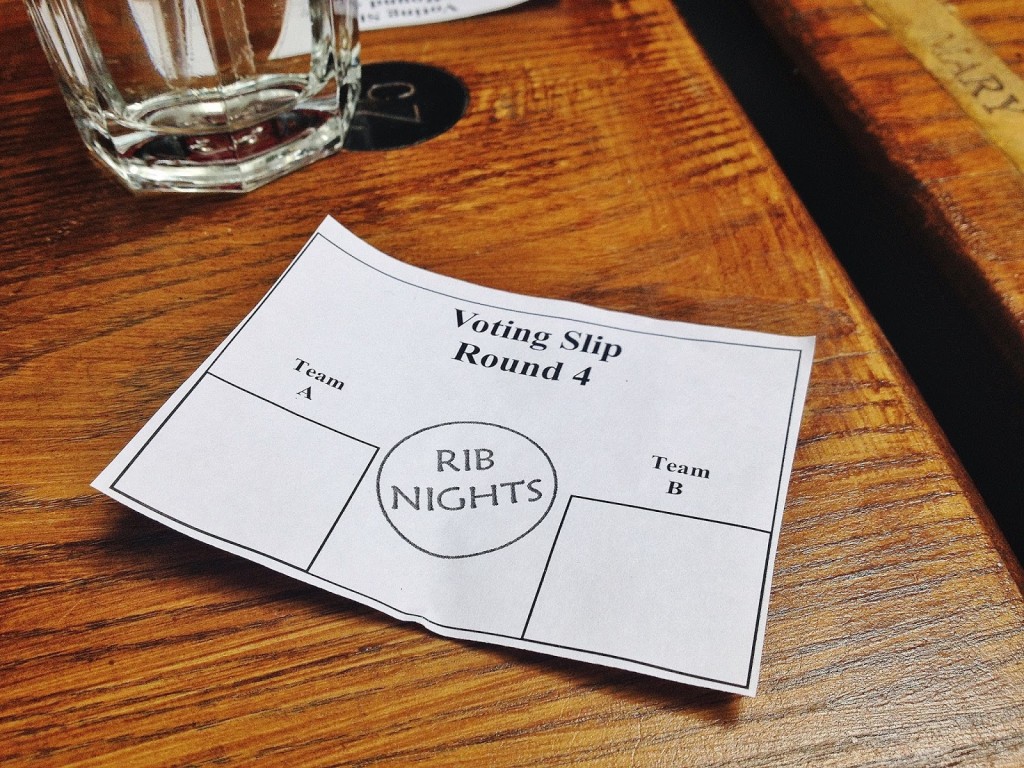 The banquet comes with large portions of chips, coleslaw and cornbread which are equally passed around the tables. I made sure to balance out the cocktail-to-rib ratio (I had a Bakewell-esque cocktail… delicious!) and thoroughly enjoyed just kicking back and feasting on some delicious food, with some amazing friends. The place also booked out a DJ who played funky music in the background while we ate. Our group of 9 all had a fantastic time eating, letting the beers/ales flow nicely, and also enjoyed some card magic from a magician who was walking around from table to table. The magician himself was incredible, and stunned us all with his tricks. He was exceptional and made most people gasp in amazement. I have now decided there is nothing better than a magic & food combination! 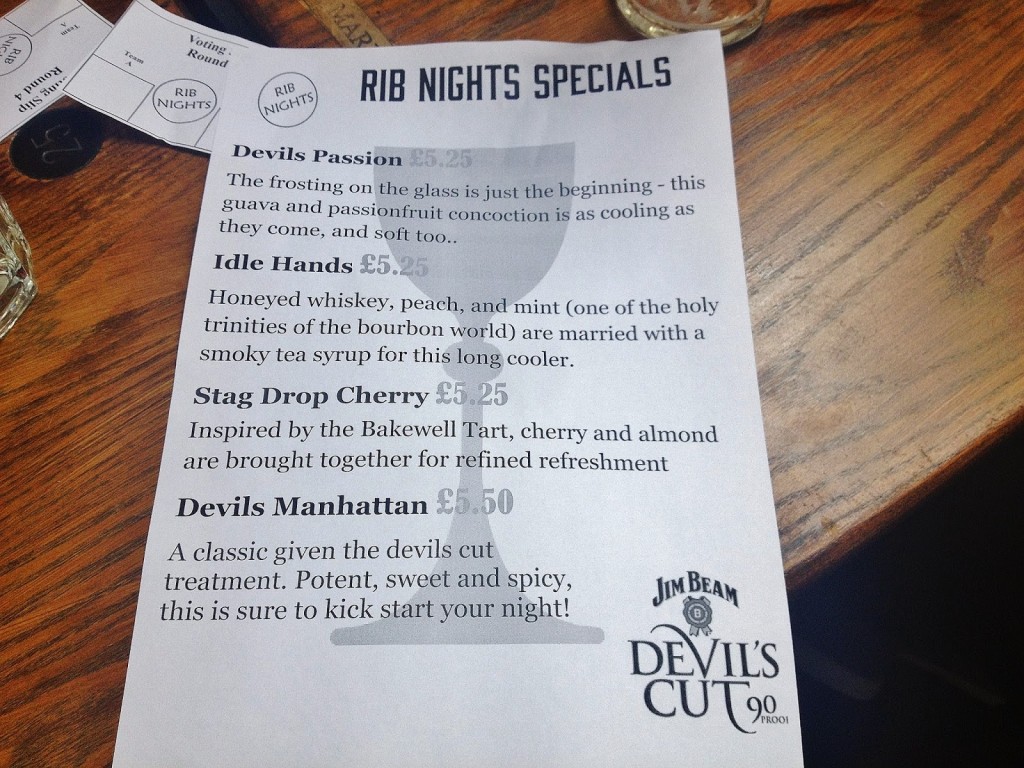 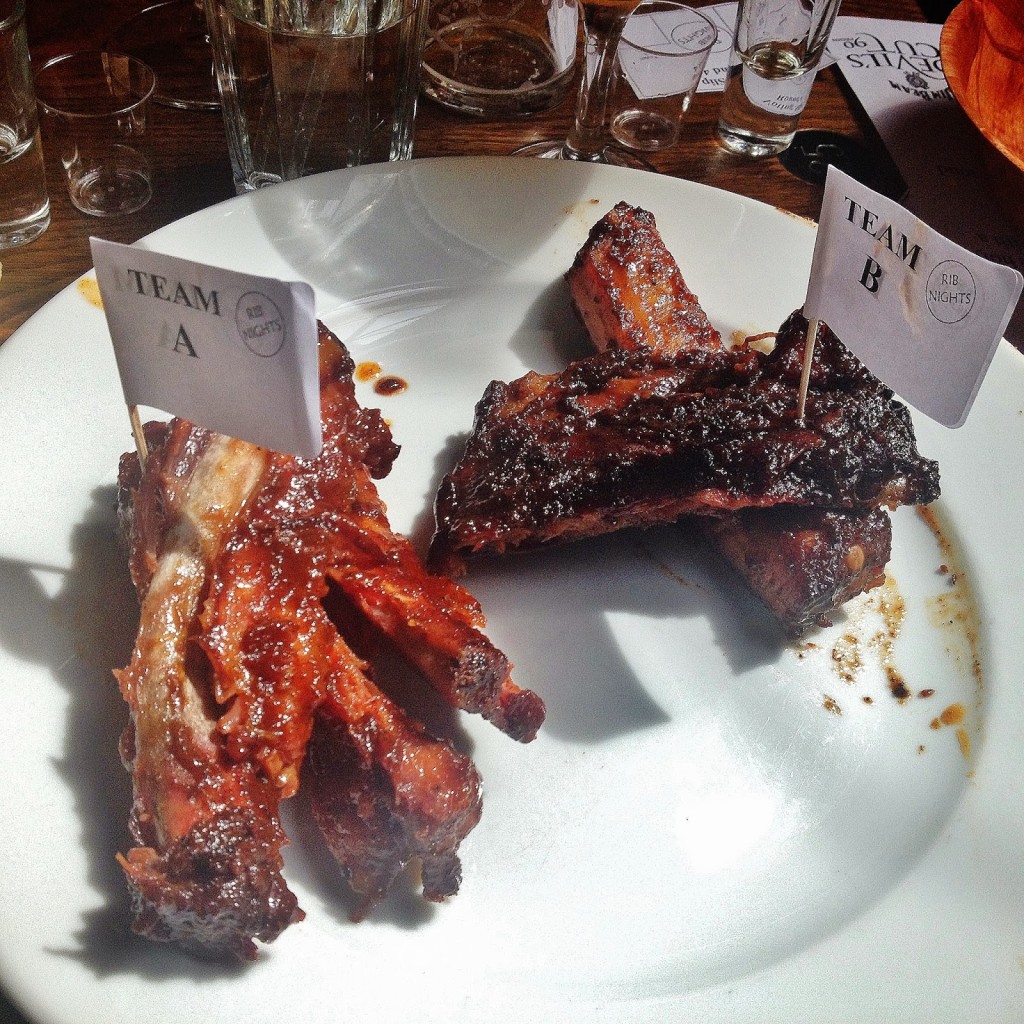 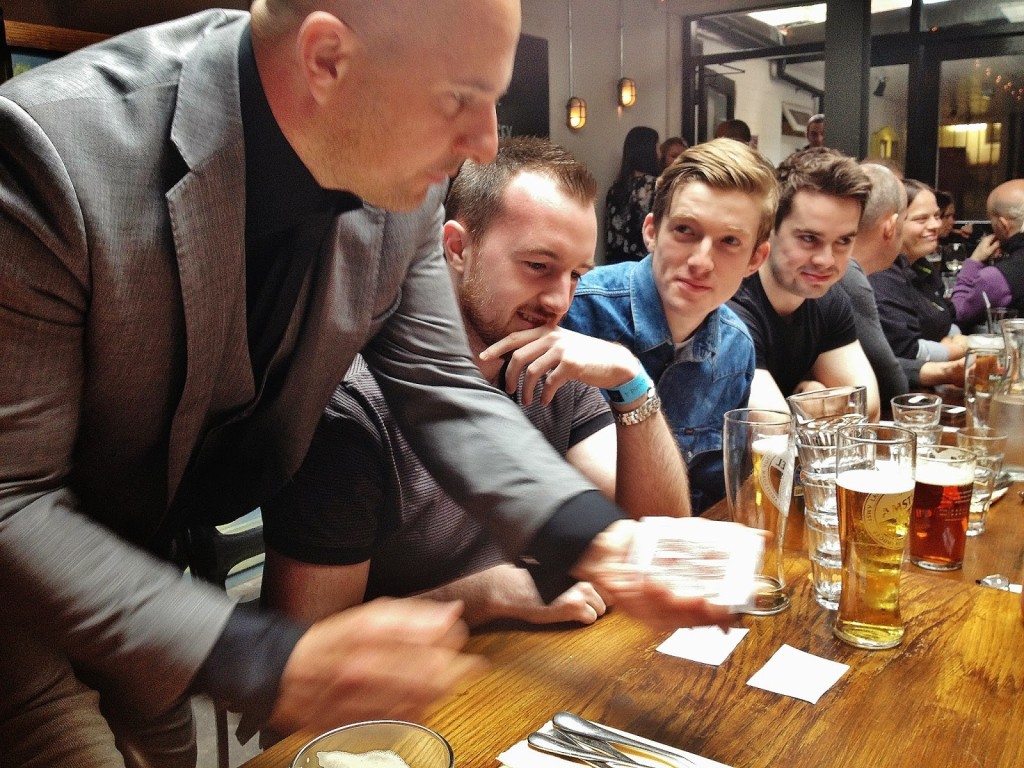 Shortly after, everyone had decided on their winners by putting a sticky ‘rib thumb print’ on our voting papers, and they were put into a bowl to cast out which team were the winners. However, since we went to the 1pm time slot, the winner wasn’t chosen until 9pm after another round of Rib Nights. (I have just been updated, Team B – Andy Annat, our favourites won!!!! :-) Not long after our ribs had gone down, gooey, mouthwatering pieces of brownies were delivered to the tables. There’s nothing like eating something sweet after a hearty meal, so these went down very well indeed.

Just as we thought the event was coming to an end, we were all surprised to find out Rib Night’s were going to introduce us to both of the BBQ teams. Racks of Ruin & Andy Annat were brought down onto the floor to tell us a little bit about their background and why they decided to join the cook-off. It then appeared Rib Night’s had a little trick up their sleeve. The magician pulled out one person from the audience, which just so happened to be my bestie, Rob. He asked 5 random people, including Rob, to choose any card they fancied from a shuffled pack of cards, but they weren’t allowed to show him what they chose. Of course, the magician managed to guess every single card correctly, and so as a prize, Rob won a  bottle of Jim Bean’s Devil’s Cut to take home with him. How amazing is that! 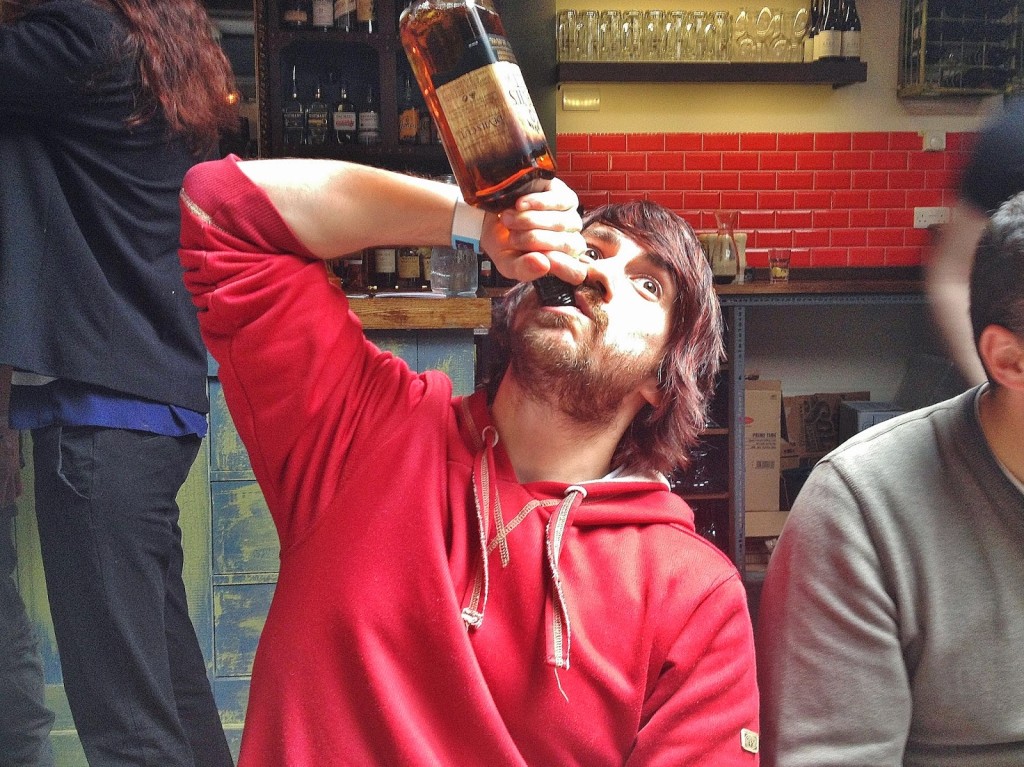 Then we had a raffle, where a person from the audience was told they could win a drawing, which a local artist had been creating at the side of our table during our dining experience. The artist supports a local charity, Sifa Fireside, which helps cases of homelessness and look after people who suffer from alcohol abuse. All of the raffle ticket money goes straight to them and is a great cause. Of course, and it just had to be –  it was  my boyfriend Josh who won the prize and the picture itself is really obscure (I think that’s what you’d call it). Of course, the picture will be coming with us into our new apartment very soon… 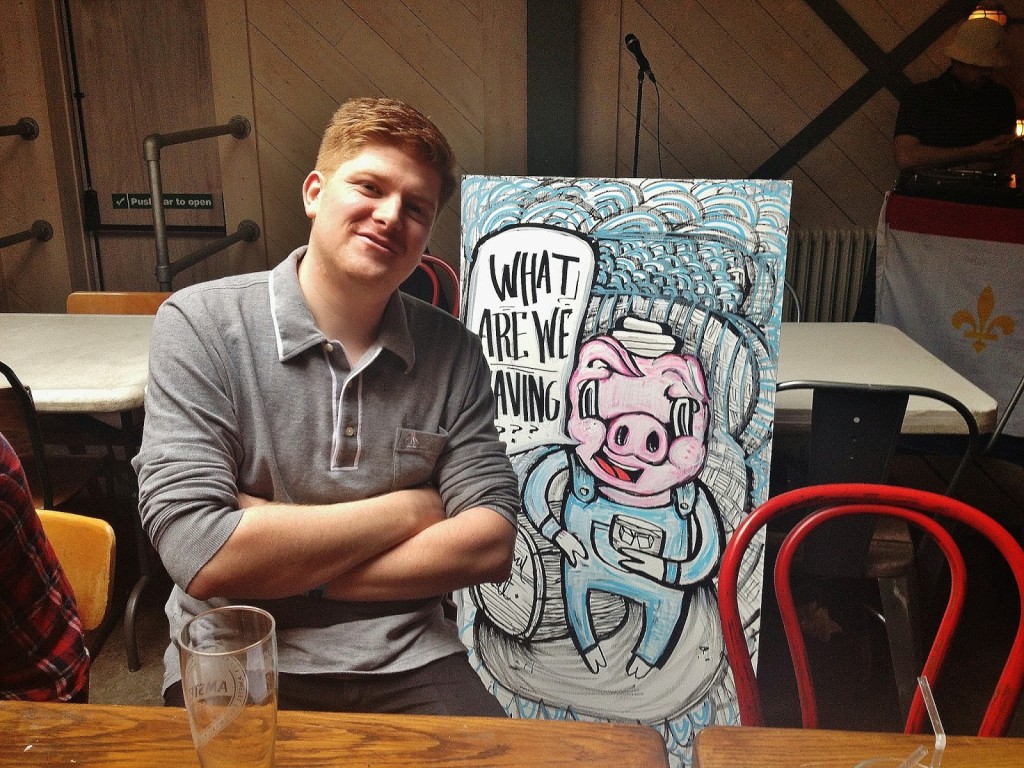 Diners travel from all over the Midlands to experience a Rib Nights event, and the event has been deservedly recognised in multiple Birmingham papers, all of which have given Rib Night’s such thrilling reviews. It is now on the move and is set to branch out towards London, Sheffield, Liverpool, Leeds and Oxford over the next couple of weeks. If you are interested, I would suggest booking your ticket as early as possible because they sell out like hot cakes. Our group had such a great time trying out different style ribs and generally just kicking back on a lazy Sunday afternoon and ate such ridiculously amazing food. After reluctantly leaving (our group were the last ones there!), we then plodded off to the local pub, The Lord Clifton, with full bellies and happy hearts. I don’t think today could have been any better and I would like to personally thank Ahmed & his perfect team for making today such a porkin’ good day. For more info, see Rib Nights on Facebook.

« Turtle Bay: A taste of the Caribbean in Birmingham 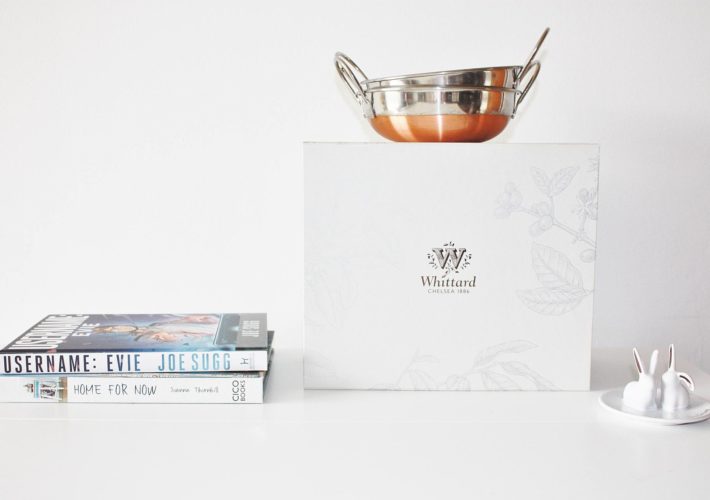 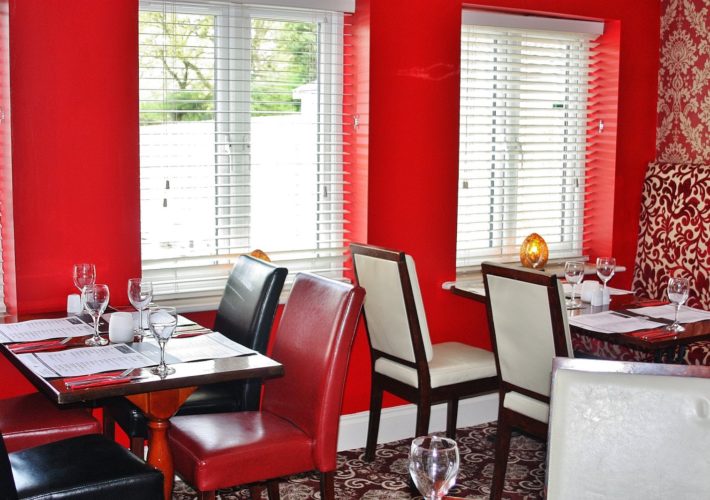