If you know me or my blog at all, you’ll know I’m partial to a hotel review or two (I have a whole hotel category in case you’re interested.) Recently, I was invited for a one night complimentary stay at Clayton Hotel, Birmingham which has recently taken over from the previous residence of Hotel La Tour on Albert Street, outside of the City Centre. I visited the hotel restaurant back in September 2017 for a meal when it was still a Marco Pierre White establishment, but wasn’t entirely satisfied with the food. You can also check my review out here. I was intrigued to go back and see what the new restaurant set up and hotel has to offer.

I arrived on a Friday afternoon at around 3pm. The check in queue was rather long which was actually a pretty good indicator of the hotel if they have so many people booked in to stay. I did spot a rather large wedding party with kids too, so straight away you know it’s a quality, family orientated hotel. It took around 10 minutes for me to reach the front desk and be checked in. The staff apologised for the wait, but I told them it’s not a problem and I completely understand the rush being Friday afternoon and all. Shortly after, I met Eva, the Sales and Marketing Coordinator at the hotel who quickly showed me around the restaurant and gave me an update on the changes since I last visited. Eva helped to organise my stay with Clayton Hotel and put everything in place, so I’m really grateful to her for the fantastic customer service.

I was told just before checking in that I had been upgraded to one of their Executive Room which was fantastic news. The room I stayed in is just one of 174 elegant guest rooms and luxury suites in the hotel. I was located on the top floor (7th) and after a short walk down the hallway I reached room 706 and inserted my card into the wall. The room itself is perfect size for one person or couple, with a ridiculously comfortable king size bed in the middle of the room. I also spotted the chaise lounge next to the window which I used for a good hour whilst looking out across to the Bullring. Ah, to be a hotel blogger. It’s such hard work, honest!

The room had neutral colours and sported a 42″ LED flat screen TV, tea & coffee making facilities tucked away behind the bed, an iron & ironing board, a hairdryer, as well as air conditioning and 24 hour room service. Best available rates for this type of room starts at £165 including wifi, but you have to pay a bit more for breakfast. The room had a desk set up in the corner which was perfect as I had to do some bits of work for a couple hours before Josh arrived. The room had a relaxed vibe and was ideal for me to get stuck into some bits before completely switching off for the night. The one thing I would say is that we tried to connect our phones to the Bluetooth in the bathroom as they have speakers, but none of the staff seemed to know how it linked up as we needed a code. The phone next to the bed also resembled a night light when we switched off the lights, so I had to turn it away from me. Maybe that’s just me being really fussy. 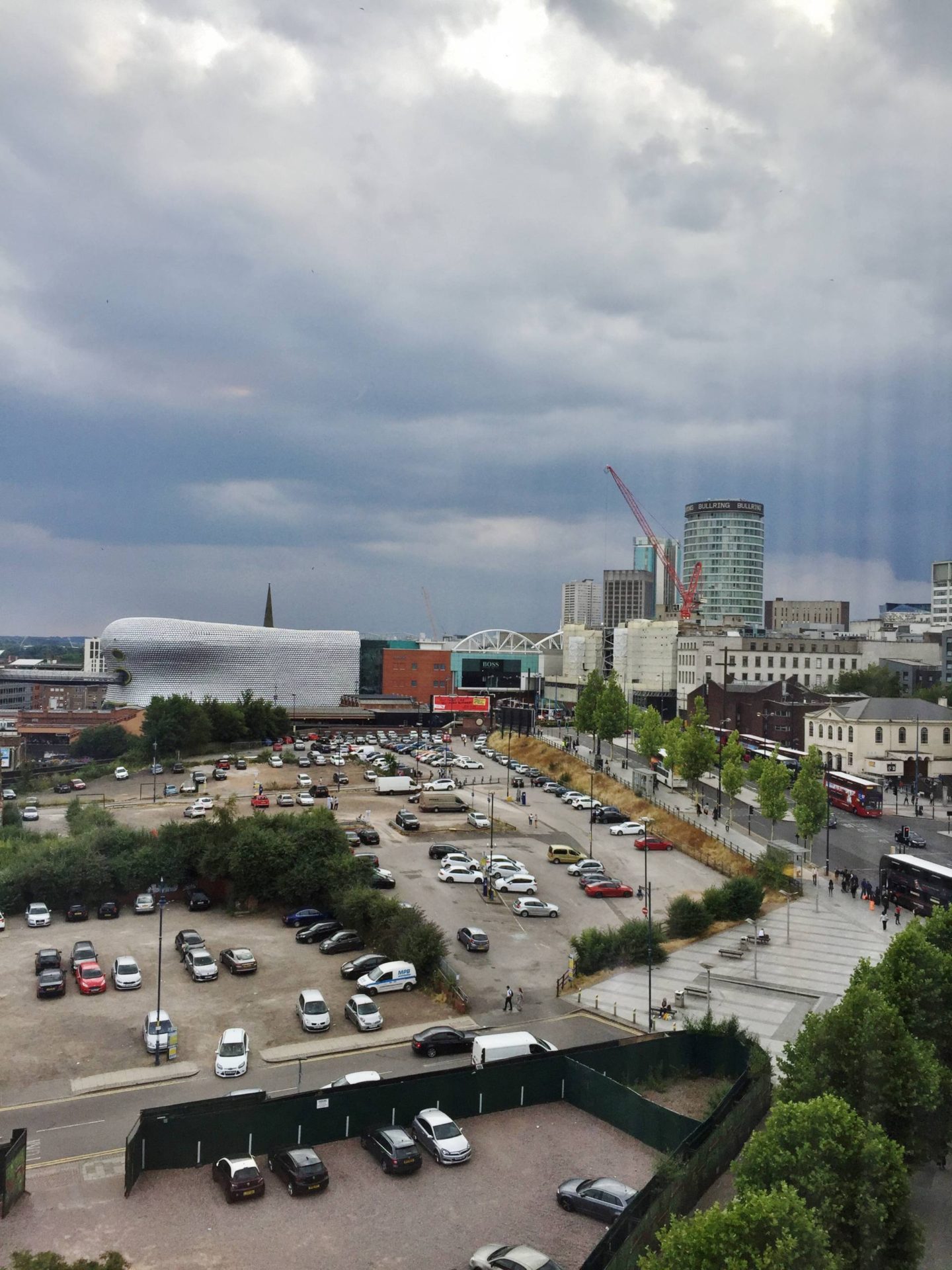 As you can see, our room faced outwards towards the centre and we had a great view of the Bullring from our room. I think the only thing that ruins the view is the car park down below, but there’s not a lot anybody can do about that. What is does mean is that the city centre is just a stone throw away and can be reached within minutes, as well as Moor Street Station. It was actually rather lovely though as I woke up at around 4am the morning after and peered out of the window. There was a glow of the skyline and nobody was around at the time. It was still rather dark and peaceful and the streets were completely bare.

The bathrooms are a decent size and are equipped with a large walk-in shower with a waterfall shower head (the huge ones that are directly above you) and a separate toilet and sink area. The best part of any bathroom break is trying out the waterfall shower head which I actually turned on with freezing cold water at first. I screamed a lot. Clayton Hotel also provide their own branded body creams, body wash, shampoo and conditioner, as well as the vital shower cap and sewing kit which I took home with me!

On the way down to dinner at 7:30PM, we spent the best part of 20 seconds watching the black and white films they have on in the lift. I really enjoy this feature because if someone else gets in the lift with you and you’re not sure where to look; everyone’s eyes tend to dart towards the TV screen. I haven’t seen this in any other hotel I’ve stayed at, so it’s kudos to Clayton Hotel for the light entertainment.

There were a fair few people dining in the Grill Restaurant when we walked in. I can’t be sure if they were staying at the hotel (most likely) or if they were people coming into dine from elsewhere. We sat in pretty much the same space we did last time we dined there and I had a great view overlooking the room. There were couples; people dining alone and also a small family at the back too. We were seen straight away by a lovely young waitress who took our drink orders and gave us two menus; one was a set menu with limited options and the full menu. As we were reviewing the restaurant we had a £50 tab to use, so we thought it best to try the set menu which fitted our price range. They serve the Weekend Wine & Dine for 2 which is a 3 course meal accompanied by bottle of house wine for £50.00 per couple. I have a feeling they change the menu regularly to correlate with the seasons – so head over to their grill site to have a look.

There seemed to be a 10 minute delay between receiving our wine and the bread and olives arriving at the table. The bread did come out warm though so I assumed it was owing to the fact they were warming it up. A selection of oil and balsamic vinegar dips with butter and olives; Josh and I always love this as a starter. I like that you receive a variety of breads too, so there are alternatives to choose from.

For my starter, I ordered the Crispy Fried Calamari with Lemon, Sesame and Wasabi Mayonnaise. They were lightly battered with just enough crunch to make them enjoyable. The Sesame and Wasabi Mayonnaise was definitely something we both enjoyed and I’m tempted to make some of my own soon. Surprisingly, Josh ordered a vegetarian dish – Summer Vegetable Tempura with Basil Pesto and Pea Shoots. We had a similar starter at a friend’s wedding last month and these were just as tasty. There’s something about fried food which sends me crazy. Both starters were actually great, which is a step up from the previous menu.

Our main courses was a completely different ball game. My Slow Cooked Belly of Pork with Grain Mustard Mash, creamed Savoy Cabbage and Roast Carrot was a hit, and the portion was gigantic. The mustard mash especially was tangy, but paired well with the tenderness of the pork. I couldn’t finish all of it, but the meal itself was great and I would order this again without hesitation. The leafy green bits on top seemed a bit unnecessary but didn’t take way the fantastic presentation and taste of the overall course. I had a taster of Josh’s Roast Cod with Buttered Linguini, Chowder of Leek, Bacon and Cockles and it was incredible. The linguine was slightly salted and worked incredibly well with the creamy sauce. Once again the portion was huge, so we couldn’t finish it all, but was a great overall meal.

We had just enough room left to squeeze in puddings. Both the Baked Vanilla Cheesecake and Lemon Meringue Ice Cream Sundae were sweet and tasty, and sent us into a food coma just in time for bed.

We had such a great sleep that we didn’t wake up until 9am. We tend to be early risers so having such a mammoth lie in is incredible. We quickly ran down to breakfast which is on from 7:30am – 10:30am on Saturday, Sunday and Bank Holidays. During the week it’s on from 6:30am – 10:00am. I had a quick look at the vitality menu which details what you can have. There’s a hot breakfast buffet section with bacon, eggs, sausages, potatoes and the sorts. There’s also a bread and cereal section, alongside a fridge full of fruits and juices. Of course, there are gluten and dairy free items too – but check with the waitress beforehand.

After a whopping breakfast, we headed back up to the room for an hour before getting showered and dressed for the day. Don’t forget, you can check out the Healthy Breakfast options for a list of all the nutritious and well-balanced foods they have to offer. I would like to thank Clayton Hotel for a wonderful stay. We felt very relaxed upon check out and minus a few hiccups including the Bluetooth and phone light mishaps, I would recommend going back here if you need a decent hotel next to the city centre. The prices reflect what you get during your stay, and although it might be a little pricier compared to other well known hotels, Clayton Hotel certainly leaves you feeling revitalised and ready to hit the day running.

Can’t end this blog without saying Clayton Hotel do a bottomless brunch option. Two courses for just £15, and you can add bubbles and other selected drinks for £20pp. This runs Saturday and Sunday from 11am-4pm.

Please note: I was invited to Clayton Hotel for a one night stay with dinner and breakfast with a +1. All opinions and photos used in this post are my own.

One Night Stay At Woodward Lakes And Lodges, Doncaster

An invitation to review the Macdonald Hotel Windsor