I’m now a huge fattie. It feels like I’ve eaten the entire contents of Ibiza. No, really… If you didn’t know already, I took a recent trip to the beautiful Spanish island – (San Antoni to be exact), to soak up the sun and to read some books. Also, just to generally relax and drink cocktails. I could write a huge blog post about what we did, but I’ll save the time and effort and just accompany the photos with a summary of what we did. Because pictures speak loud than words right? My trip with my best friend was AWESOME.

We arrived at 3am on Sunday the 15th June. After our continental breakfast at 8am, which ranged from different meats, cheeses, breads and a hot, cooked breakfast, we hit the pool to catch some rays. The first thing we did was get some Pina coladas on the go! Standard. We kicked back and relaxed by the pool for the first day there. We stayed at Hotel Abrat, a 3-star accommodation which overlooked the sea. The staff were incredibly friendly and the rooms were comfy and clean. We couldn’t have chosen a better hotel. 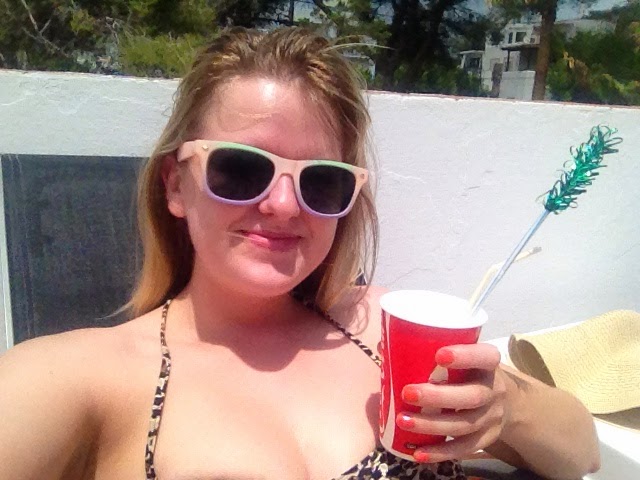 After watching the sun go down and watching the locals come out to play, we walked onto the beach after grabbing some ice-cream from the local outdoor vendor. I really enjoyed our first day here.

On day two, we ventured out into the West End part of San Antonio to hunt down some delicious food next to the harbour. (This is where the party goers go to… party). We found a cute little food joint and I ordered the spare ribs. We also rumbled around some of the local shops and bought some pretty jewellery and bracelets. Laura and I ordered a litre of sangria. Because in reality we are both dirty boozers.

On our way back to the hotel, we found a pebble beach. I did a double-take when I saw Ronaldo’s identical twin in tighty- whitey pants walk onto the sand. I think he thought I was staring at him in his pants, but actually, I was staring at how much he looked like Ronaldo. I didn’t get a shot of his face, but I did manage to snap a shot of him overlooking the ocean while another man dived into the sea. It looks like the guy is balancing on top of another man’s head (see below).  Laura stole my camera for a few of these pictures. Credit to her for the beautiful picture of me and my feet sticking in the air.

On the night, we dressed up a little and hit another food place/hotel called ‘Palm Beach’, which is just a few hundred yards away from our hotel. I gutted a Seabream fish all on my own. Laura ordered the Seabass. We then watched a man on one of those water-pump things which push you into the air. I did a lot of people watching on holiday.

Afterwards, we hit the sunset strip and drank cocktails at Mint!, drank shots at Cafe Mambo and at  Cafe Del Mar, one of the waiters laughed at my pronunciation of the cocktail “Caipirinha”.

On Wednesday, we headed off for a boat party/club day, but before that, we went on a midday stroll and took some pictures. Afterwards we went on the Pukka-Up Boat party in the Mediterranean Sea and drank cider through straws like 12-year-olds. We raved until sunset and met some really friendly people on there. We sat and chatted and got to know this one guy from India who travelled on his own. There were 4 boats, each with around 100 people on board, and we all travelled across the water while a live DJ blasted out some Ibiza dance tunes. It was a very memorable day.

We hopped off the boat around 9pm, and we managed to get a small bite to eat (kebab and chips… heeeeello!) before heading off the Club Amnesia. When we arrived there around 11pm, it was pretty empty – but found out there was a whole other room which was starting to fill up with the boat-party goers. Our boat party ticket also included the cost of entrance to the club, but it was 15 euros a drink inside! We got asked by a strange young lady if we were selling drugs but we clearly stated we were there to have good, clean fun 😉 We stayed for a couple of hours and headed back as the day had been soooo long. The entire day was memorable and if I went back to Ibiza again, I’d definitely do the Pukka Up Boat Party. It was insane.

The day after (Thursday) was spent having some more down time trying to become a Bronze Goddess, along with reading a book based on the Zombie Apocolypse, which is set in my home town of Birmingham. (Plug: The book is called Ravage by a local author Iain Rob Wright if you also have a morbid outlook on life like I do and want to read it).

On Thursday night, we headed out again in search for food. We came across a place right next to our hotel called Villa Manchega which is one of the best Tapas places in San Antonio. We read good reviews about the place so we decided to hit it up. Laura and I shared a huge platter which consisted of meat, potatos, and other delicious things, and we drank glasses of wine. At this point in the holiday, we were so spaced out and relaxed, all we wanted to do was eat, drink and smoke a Mango and Watermelon Shisha. Which is exactly what we did later on that night at Cafe Del Mar after another walk along the beach…

Our penultimate day was spent doing more sunbathing and more cocktail drinking (I swears that’s all we ever did!) and we decided to spend Friday night at one of the most stunning restaurants on the whole island – Villa Mercedes. We had 3 courses for 20 euros, and I was hesitant about the portion sizes. Being typically British, I decided to quiz her on how big the dishes were and we both ended up doing weird hand signals to each other as the waitress didn’t really understand my accent all that well. (Being from Birmingham probably didn’t help either). Nevertheless, it was the best meal I’ve probably ever eaten abroad! I had Smoked salmon for starters and I swear they used a whole pack of smoked salmon just for me. I looked like a right dick asking how big the portions were, because they were actually HUGE. Poached duck and apple mash was my chosen main (Laura chose this too) and finally, I ate the chocolate brownie
for dessert. The night was topped off with a free glass of champagne from the staff. Prepare yourself for some food wanker pictures, it was too good not to remember!

Our final day was spent visiting our local beach and packing up our luggage and sleeping before our 2am flight. We also managed to grab ourselves some lasagne and chips from our hotel before we departed the hotel at 11pm. I really miss the breakfast and food at our hotel, because it was always spot on. We bought a fair amount of alcohol during our trip, so we had to make sure we weren’t overweight for bringing it home. I really loved going away with my best friend and just generally kicking back and enjoying ourselves. We only get to see each other a few times a year, so this holiday is something we both needed. If you ever visit Ibiza, I suggest you stay at Hotel Abrat like we did. It’s walking distance to everything and it overlooks the ocean. Reality has set in now I’m back, but I’m happy I get to reflect on my holiday, and to also share it with you, my lovely readers…

A Trip To Reykjavik – Iceland

Lifestyle – A day out at Hatton Farm

In Collaboration with Unahotels: An Invitation To Tuscany, Italy

Places To Add To Your Travel Bucketlist

A Day Trip To Bicester Village