Some of us got drunk. Most of us ate ALL the ribs. Every single one of us left feeling like we were gonna’ explode. If you don’t know what Ribs Nights is all about – well then dear god I hope you’re ready, because you’re about to witness the best food event you’ll see on the internet.

Where else could you sit around with your mates, bang the shit out of tables and scream for your food to be bought out to you without seeming like a complete and utter arsehole? At The Church Inn, Birmingham of course! Rib Nights, tours around the country and came back to Brum last week to host the special event which sells out like hot cakes (i’m deadly serious, this years tickets sold out in less than 3 hours). Our original team weren’t going to go down without a fight, and managed to secure all our tickets again within the first hour of release.

It was our second time attending Rib Nights as a group, so we are familiar with how quickly the room begins to fill up. You might be sat next to a complete stranger, but the atmosphere in the room is buzzing so hard, there’s no time for any awkwardness. People begin chatting away and men usually get their rounds in ready at the bar. When the final person has taken their seat, it starts…

This is when the magic really happens. Ahmed Kage, the creator of Rib Nights puts in countless hours and barely sleeps, all to make sure each and every guest is catered to on the big day. (It was his pretend birthday on the day we attended so I bought him a bag full of birthday treats… Happy Birthday today though, old chap!). Ahmed introduced himself and how the event works, when finally the whole place begins to hum with people drumming so hard on the tables that the floor shakes. This is the ritual way of telling the chefs on the roof that we were all ready for food! The room finally erupting with the chorus 80 people shouting ‘RIB NIGHTS!’. We were ready to go, and some waiters began to bring out shots of Pickle Back to start the evening. (Whisky and picklejuice… uhm… yes!)

The aim of the event is for two separate BBQ teams (who do actually cook on the rooftop of the building) to battle it out to produce the most tastiest ribs of the day. You are given 3 ribs from each team to devour. At the end of the meal, you vote for the team you think served the best grub and put a grimy, sticky BBQ thumb print on either Team A or Team B on the voting slip. The secret being no one knows which team cooks which.

This time around, our ribs came out with large portions of chips, corn on the cobs and salad. Even though I was still dying of illness, I made sure to balance out the meal by knocking back some whisky cocktails.

We were all familiar to the DJ Manzo from Hero Records as he performed last time we were there. I was also excited to find out that Ahmed bought back the same BLOODY MARVELLOUS magician, (Gavin Parsons) to perform again. I’m not even kidding, some of his tricks are mind blowing. Make sure you go and check out his website here if you are looking for a local performer for parties/weddings etc. I can guarantee I’ll be booking him in future. 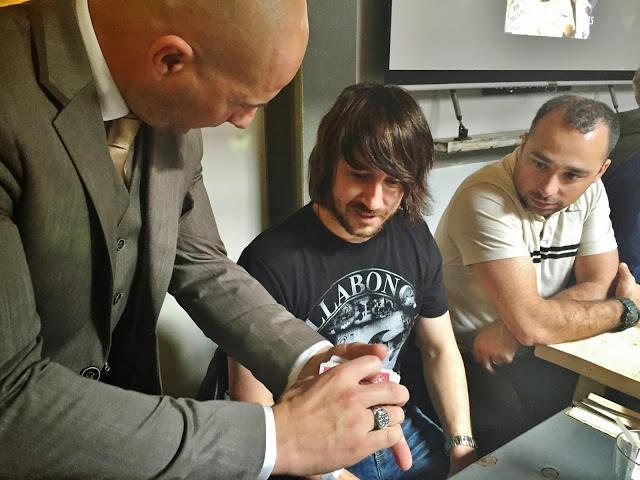 As usual, we were dazzled with card tricks and soon after we had all eaten, we placed our sticky ‘rib thumb print’ on our voting papers  The majority of people on our team voted Team A – @OldSmokestack –  as they were smoky and woody flavoured, compared to the HUGE meaty by Team B – who can be found on Twitter @pitmastersmoke1.  The winners were later revealed on the night time event at 9pm (Well done, Team B, it was well deserved). Not long after our huge feast of ribs had gone down, we were treated to some moist and gooey brownie pieces.

In true Rib style, the evening ended with both teams being bought down into the room to face their audience. And also, Gavin wouldn’t be the amazing magician he is without a final trick to stun the audience. I feel the second time around topped our first Rib events and would love to thank Ahmed for always putting on a great show. What do you think of the event?

Shaking Up My Daily Food Intake With Spatone