The other week I was invited to try the food and cocktail menu at Hotel La Tour. Currently known as a Marco Pierre White establishment, it should be noted that it’s soon to be taken over by Clayton Birmingham. I was interested to see how the food would compare to other places in Birmingham, especially the other Marco Pierre White restaurant located in the Cube. It’s obvious to say I’m definitely not a fan of his others! More so, I was looking for another steak and wine night after my previous trip to Argentinian Steak Restaurant Gaucho which went down an absolute treat. On the day of the review, I started my one week of annual leave just before heading to Iceland, so I couldn’t think of a better way to start it than to sit and eat some grub to kick off my holiday.

The hotel was very quiet for a Friday night when we arrived at around 6pm, but there were a few couples dotted around the entrance area sipping on drinks. I could also spot a few people eating in the restaurant area, so assumed they were staying at the hotel. We walked up to the bar and I had a quick browse through the cocktail menu. There’s a big selection of cocktails, beers and non alcoholic drinks, but I asked for something gin based. This little sweet gin concoction was knocked up for me and it consists of egg whites. I’m a big fan of sweet drinks anyway, so this was a good way to begin our meal.

Whilst browsing through the food menu after sitting down in the restaurant area, our lovely waitress asked us if we’d like something for the table. I do think the food is pricey for the quality you receive but it’s to be debated. From olives, chipolatas, to warm sourdough and prunes wrapped in bacon, we chose the latter and they were actually rather okay. I’m not usually a fan of prunes, but these resembled pigs in blankets so I figured they couldn’t be that bad. The sweetness of the prunes in contrast to the salty stripped of bacon were actually rather nice and came served with a cocktail stick through the centre for easy eating. They definitely won’t be to everyone’s taste. 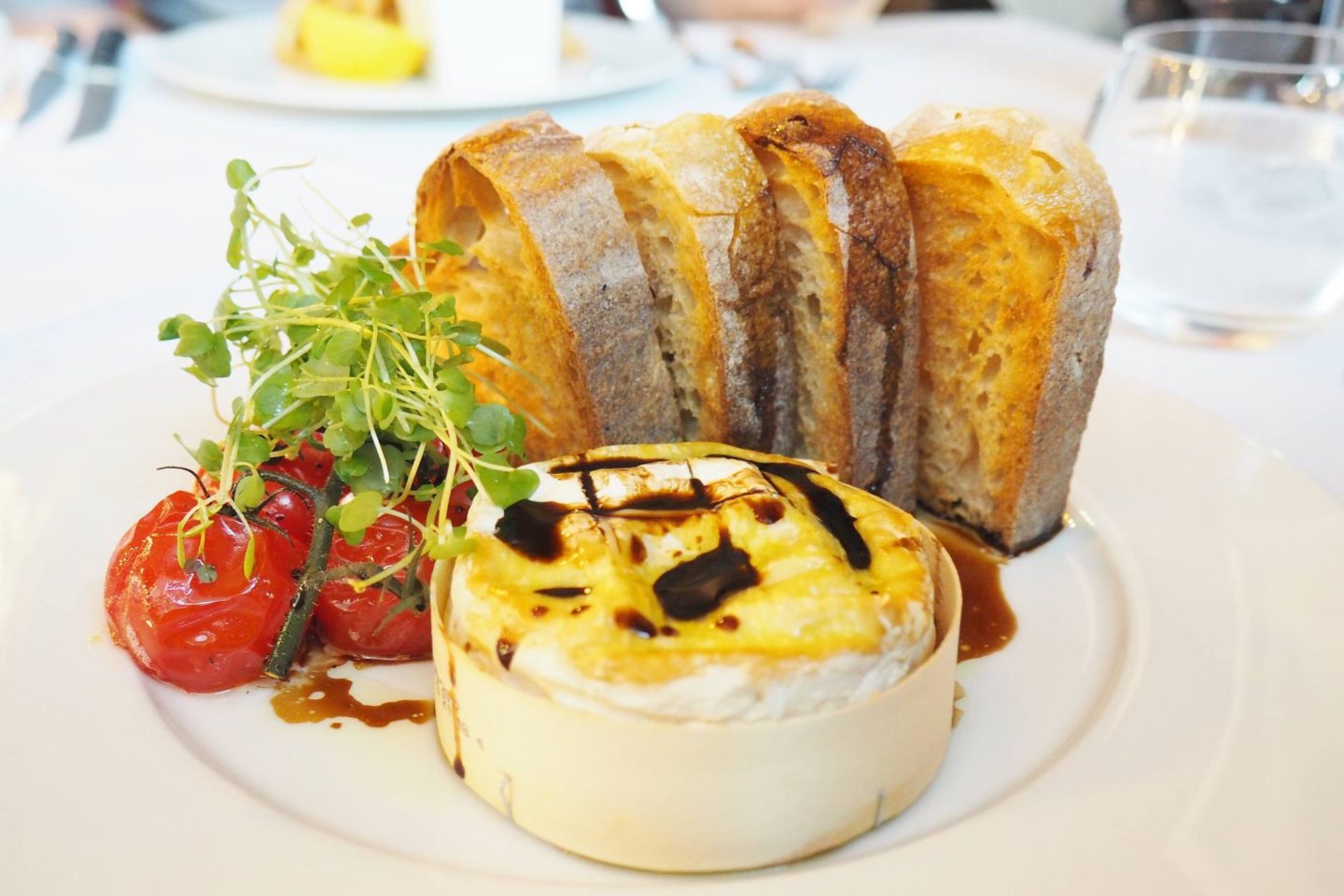 For starters, we shared a warm baked Camembert, with vintage balsamic (£8.75) and a plate of salt and pepper crispy calamari (£7.95). The food came in good time and mine was paired with some toasted sourdough and roast vine tomatoes. The presentation was minimal but neat, and the tomatoes were really sweet. Perfect starter portions for two to share I think! 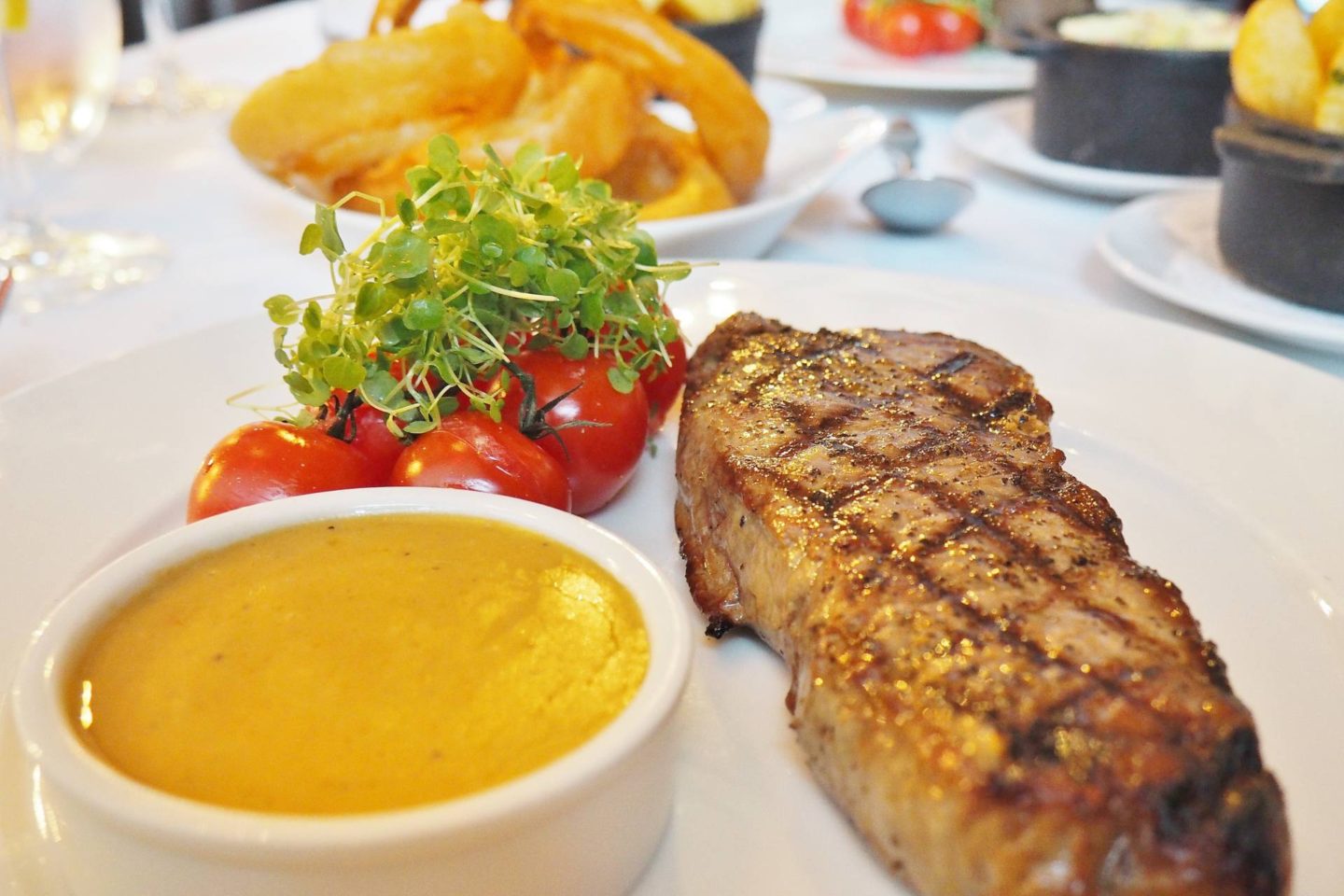 For mains, I wanted to try steak so I opted for Sirloin (£26) with peppercorn sauce. Josh went for Fillet steak (£34). Alongside our steaks, we received triple cooked chips and I asked for an extra side of onion rings and creamed cabbage and bacon (£3.75 each). Again, the food came out in good time. When I first cut into it, I noticed the steak was a little more well done than what I’d usually have, especially as I asked for medium / rare. The waitress and management did apologise however, and asked me if I’d like a fresh one. This wasn’t an issue though as the steak was still really flavoursome. Paired with the peppercorn sauce, the onion rings and a big glass of Malbec, it was a very ‘beige’ meal but good for a Friday night dinner. I do feel the chips were lacking and tasted dry. 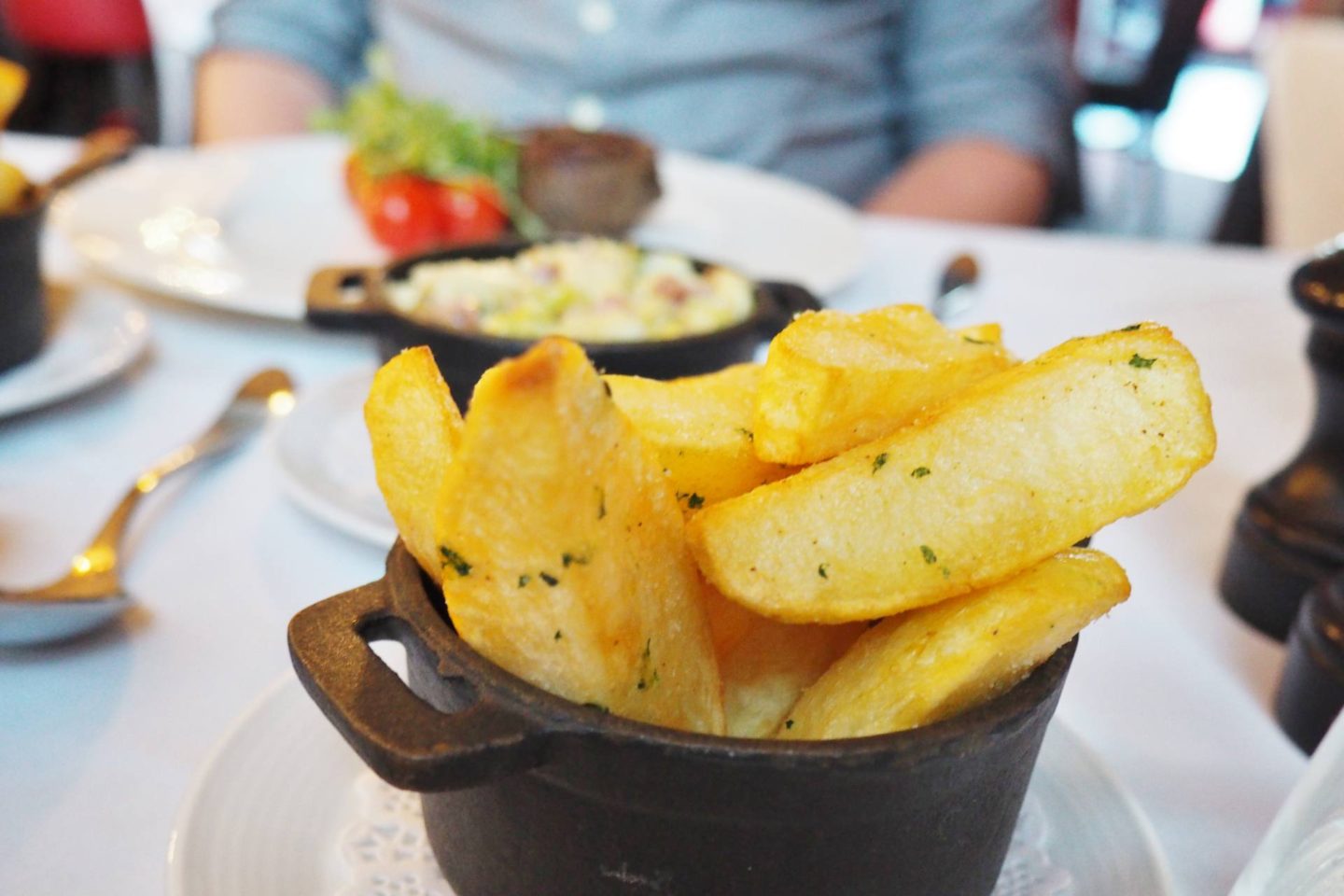 Once our mains had slid down, we had just enough room left for dessert and we were encouraged to try something sweet to end our meal by the general manager. After a steak, I very rarely want something chocolatey but somehow we ended up asking for the Warm Chocolate Brownie with milk ice cream (£6.50) with two spoons. The brownie was rich, smooth and paired really well with the soft ice cream.

Thinking about it, I wouldn’t usually head over to Hotel La Tour for food unless I was staying there but I know people have mixed reviews. I would like to thank Laura Mimi Morton for the invitation to come and try the food and cocktails on a Friday night. I won’t be heading back as the Chophouse is now closing. I’d be interested to know whether you tried the food at Hotel La Tour, Birmingham before and whether you rated or slated it!

Please note, I was invited to Hotel La Tour with a +1 for a complimentary meal with drinks in exchange for my thoughts on the menu. All thoughts are my own and now I want a glass of wine…

« How To Visit The Vatican Without Crowds With The Roman Guy

A Trip To Italy – Exploring Sorrento »

Today has been rather nice. Got up late. Had break

It’s pretty great when your boyfriend cooks a cr

We used our hour of freedom yesterday to wonder Co

Friday night feast (at home) thanks to @originalpa

Enjoying some sunshine with my little Cabbage Patc

Bringing the outside in. Also desperately need som