When a new restaurant opens in Birmingham, there’s two kinds of people that talk about it. Those that love the place, and those that love to hate it. I, like many others, have eaten at another Ivy restaurant before which a lot of people won’t know is actually a chain. A few years back I visited the one in London and the walls were covered in flowers and the tables beautifully set. Much like it’s new sibling restaurant in Birmingham, it has the same elegance and poise of a brand new iconic restaurant.

I was invited to try the lunch time menu and had the pleasuring of inviting a guest (Josh) to join me. We were greeted at the door and shown to our table up the stairs on the first level. A corner booth was conveniently waiting for us that gave us the best view of the room. Known as a converted Louis Vuitton store, The Ivy has a 1920s aesthetic with a vast amount of plush chairs, bold sofas, and vivid wall prints. Both of the two rooms available rooms are attractive and airy. The place makes you feel like you’re sitting in someone’s lounge.

The Ivy menu is extensive. Cocktails, food and dessert are crammed together on the same page but don’t let this put you off. Our server was pleasant and food came in reasonable time considering the place was starting to fill up fast around noon. We noticed one agitated group loudly state they had already ‘booked a table by the window’ but to their annoyance were seated in the middle of the room. There was also a man dining in a cap and flip flops which annoyed me. At least try and dress appropriately when you come here.

Before we sampled the food, we were asked if we’d like to try some of the cocktails. Naturally I went for one of the most expensive drinks on the menu. The Ivy Royale flute (£10.25) is the signature cocktail with Kir Royale, Briottet Rose liqueur, Sipsmith sloe gin & hibiscus, topped with Champagne. It’s a refreshing drink and definitely a good one to toast a celebration. Josh asked for the Angel’s Share cocktail, packed with flavour and is very sweet. The mojito combines kumquats and kaffir limes and Havana rum (£9.50). 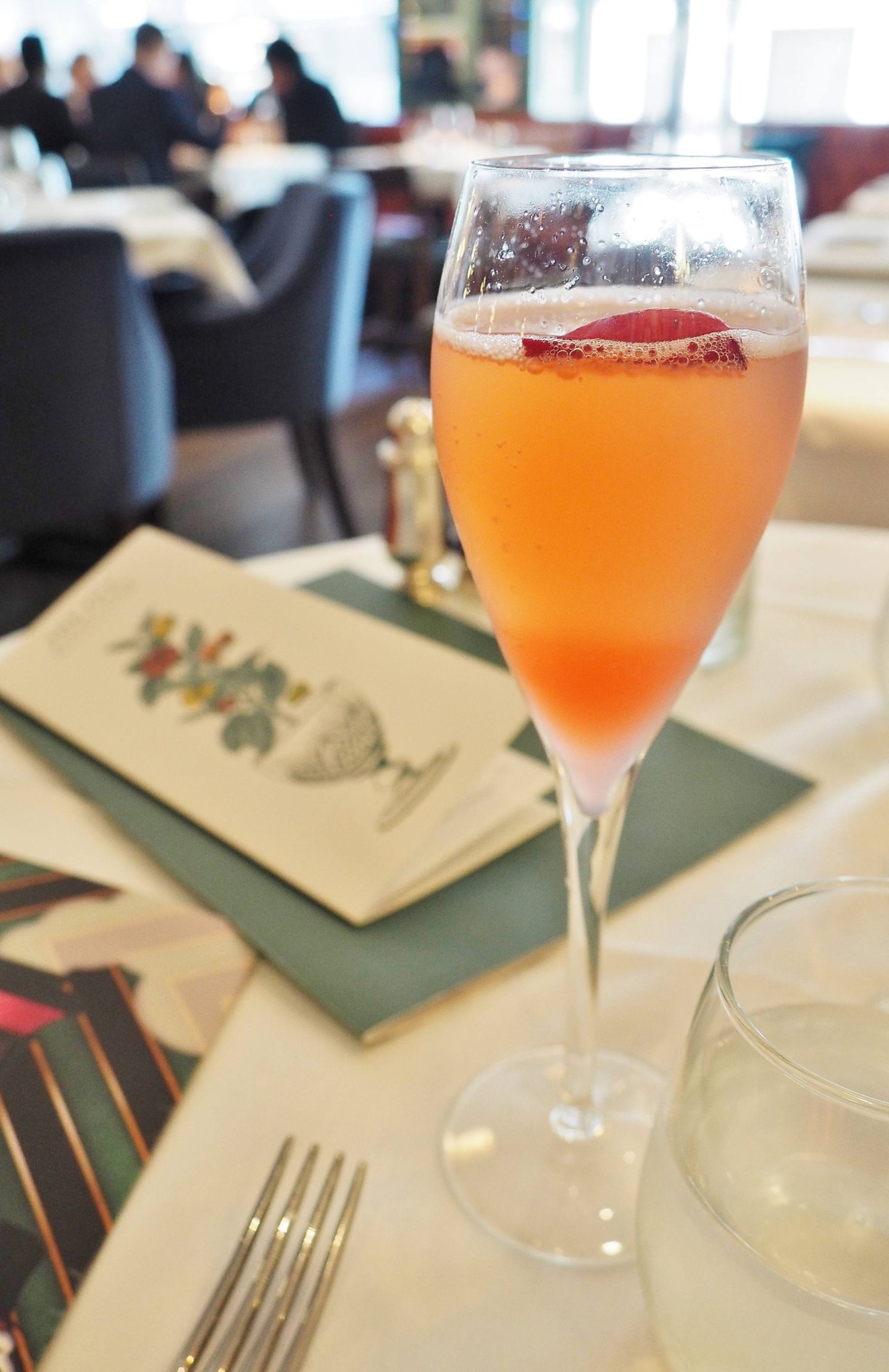 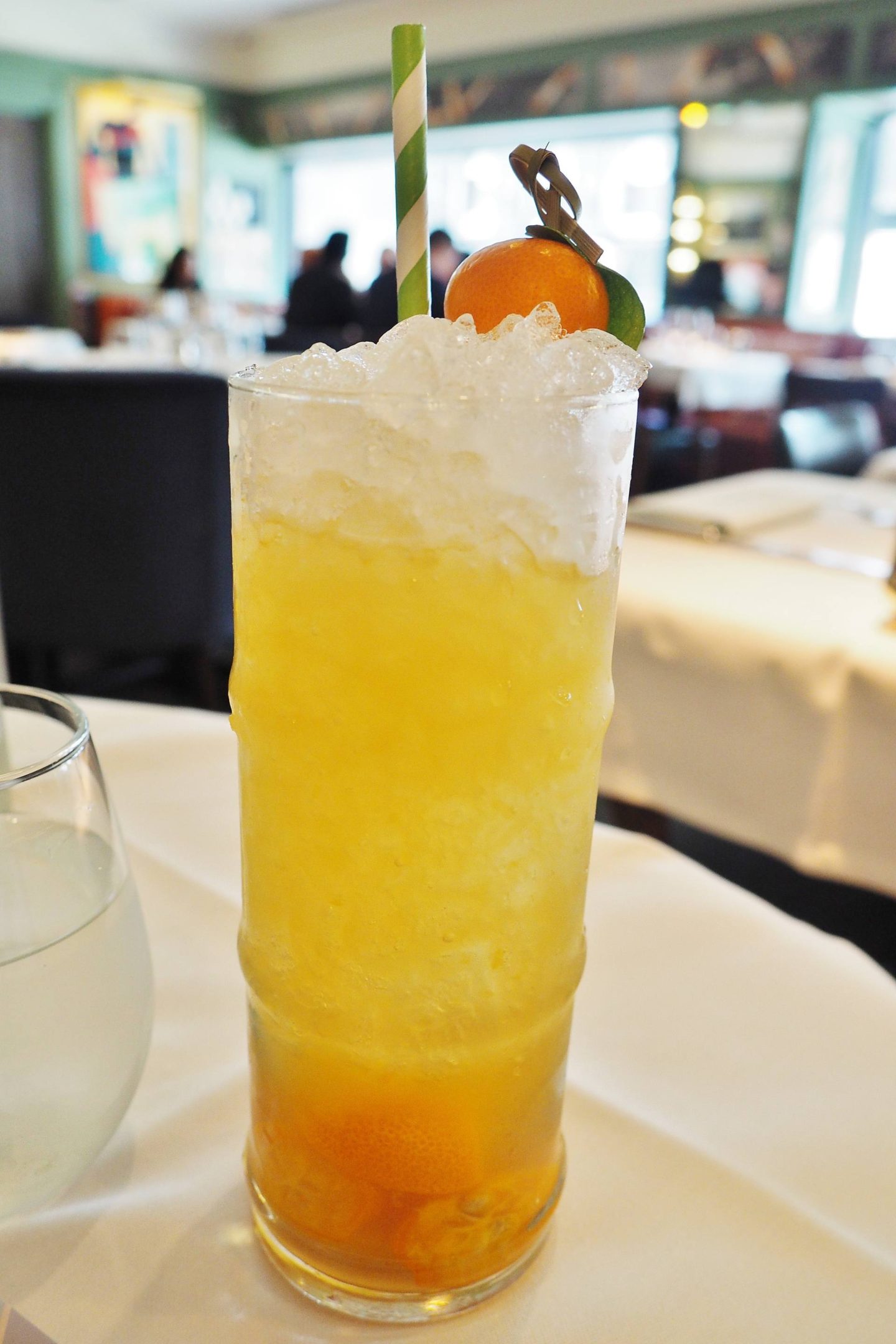 The Ivy A La Carte Menu

It’s worth mentioning there’s a variety of menu options available at The Ivy, Birmingham. From breakfast, to a la carte, afternoon tea, weekend brunch and more, you’re spoiled for choice which isn’t a bad thing. Be sure to check out the menus here. The lunch service starts from 11:30AM and showcases British classics from soups to prawn cocktail and raw market salad. There’s a nod to Italian and fish dishes too. There’s a large amount of side dishes to choose from also at reasonable prices so you definitely won’t go leave hungry.

I wasn’t sure what I fancied for starters but knew I wanted something light before face planting a whole lobster. The Atlantic sea scallops (£11.95) submerged in a pea purée with broad beans, lemon zest, sea cress and crispy shallots was a tasty starter. Not too filling, the purée complimented the tender fish and the portion size is adequate for the price. Josh’s Oak smoked salmon (£9.50) was presented as expected, a simple sheet of salmon with black pepper and lemon with rye soda bread. It’s hard to make salmon look sexy but it was delicious all the same. Not certain I’d order this again as there are more exciting dishes to try. 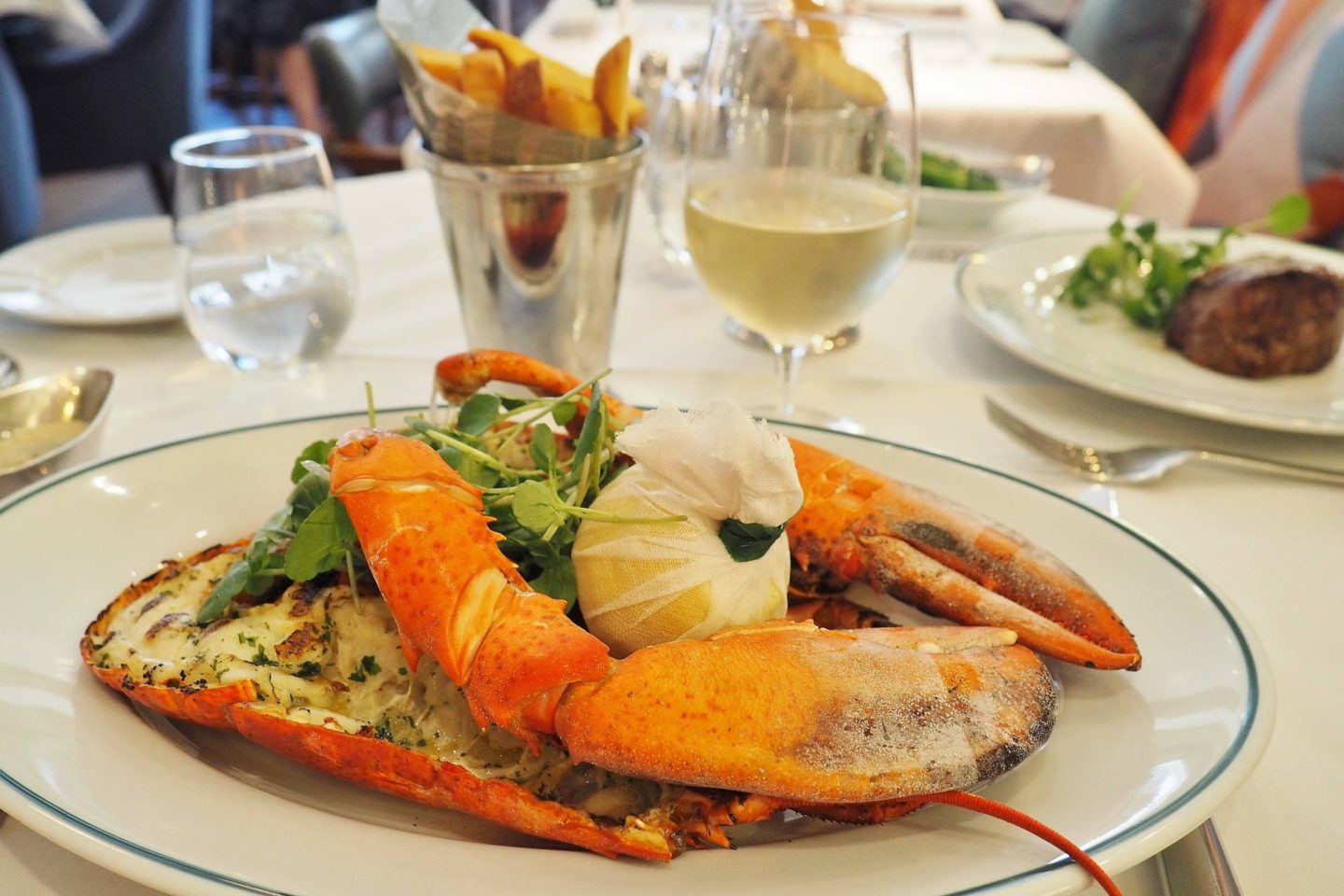 Since this was a reviewing opportunity, I pulled out all of the stops and ordered the Grilled whole lobster. The dish is accompanied by garlic and parsley butter, watercress and thick cut chips. For 34 of your gold coins, you can crunch, break, scoop and suck lobster parts from the shell with ease. I disliked the chips as they’re too soft and not crunchy enough for my liking. This specific lobster dish however is a damn sight tastier than any other lobster I’ve had in the city centre. It’s seasoned well and there’s a lot of meat to dig into. I do think the watercress placed strategically on top is an unnecessary decoration but it didn’t hinder the meal in any way. Would I order this again? Most definitely. 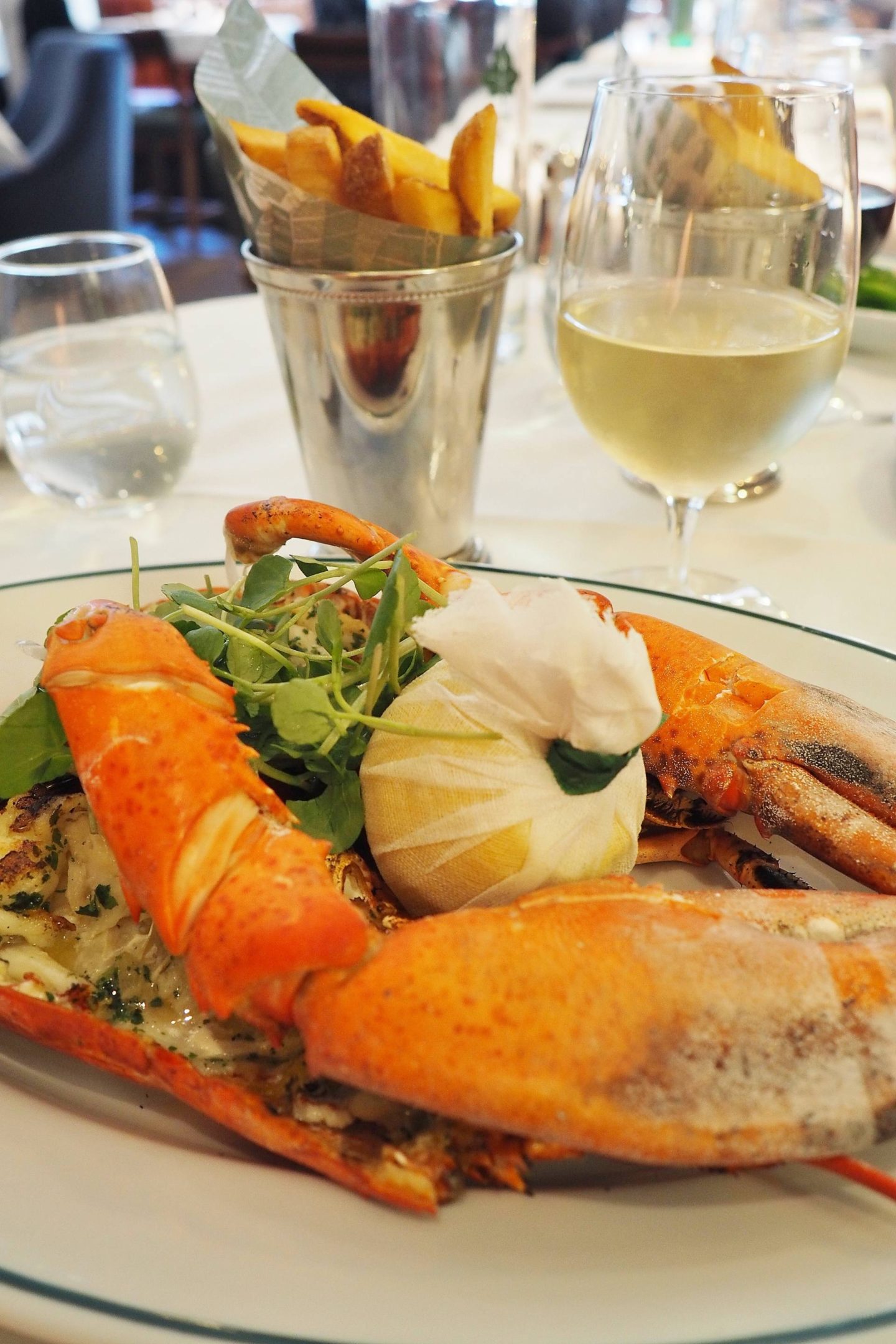 Less visually pleasing than the lobster, the 200g Fillet steak (£29.50) boasts a ‘prime cut grass-fed English’ cut. When it comes to steaks in Birmingham, you’ll know my thoughts straight away. I think there’s only two places that do it exceptionally well. Josh’s steak seemed a little small for the plate but in all fairness I was comparing it to a whole lobster on mine. I didn’t try it myself but was told it was perfectly cooked medium rare. Josh said he wishes he’d ordered it completely rare as it was a good piece of meat.

I’ve seen numerous people post images of their Chocolate Bombe (£8.50) experience on social media. It’s pure theatrics but so visually pleasing. The ‘bombe’ consists of a hollow chocolate shell with a vanilla ice cream and honeycomb centre. When the hot salted caramel sauce is poured over the top, it starts to melt away revealing the ice cream in the middle. The women on the table opposite us were ‘oohing’ and ‘ahhing’ whilst it was happening. It’s an incredibly rich and sweet dish so be careful if you order one because your face might explode if you don’t like the sweet stuff.

Josh has this thing of either ordering a Chocolate Brownie or Crème brûlée (£6.50) for pudding. A food fetish if you will. It came in a copper pot and was evenly (and perfectly) blow torched on top. There’s just something about hearing the first ‘crack’ of the caramelised sugar crust which gives me a shiver or two. A pricier dish compared to most other restaurants, I wouldn’t rush to order this type of dessert when they have Mini chocolate truffles (£3.50) or Apple Tart (£7.95) as alternatives. It was a great end to the meal nonetheless. 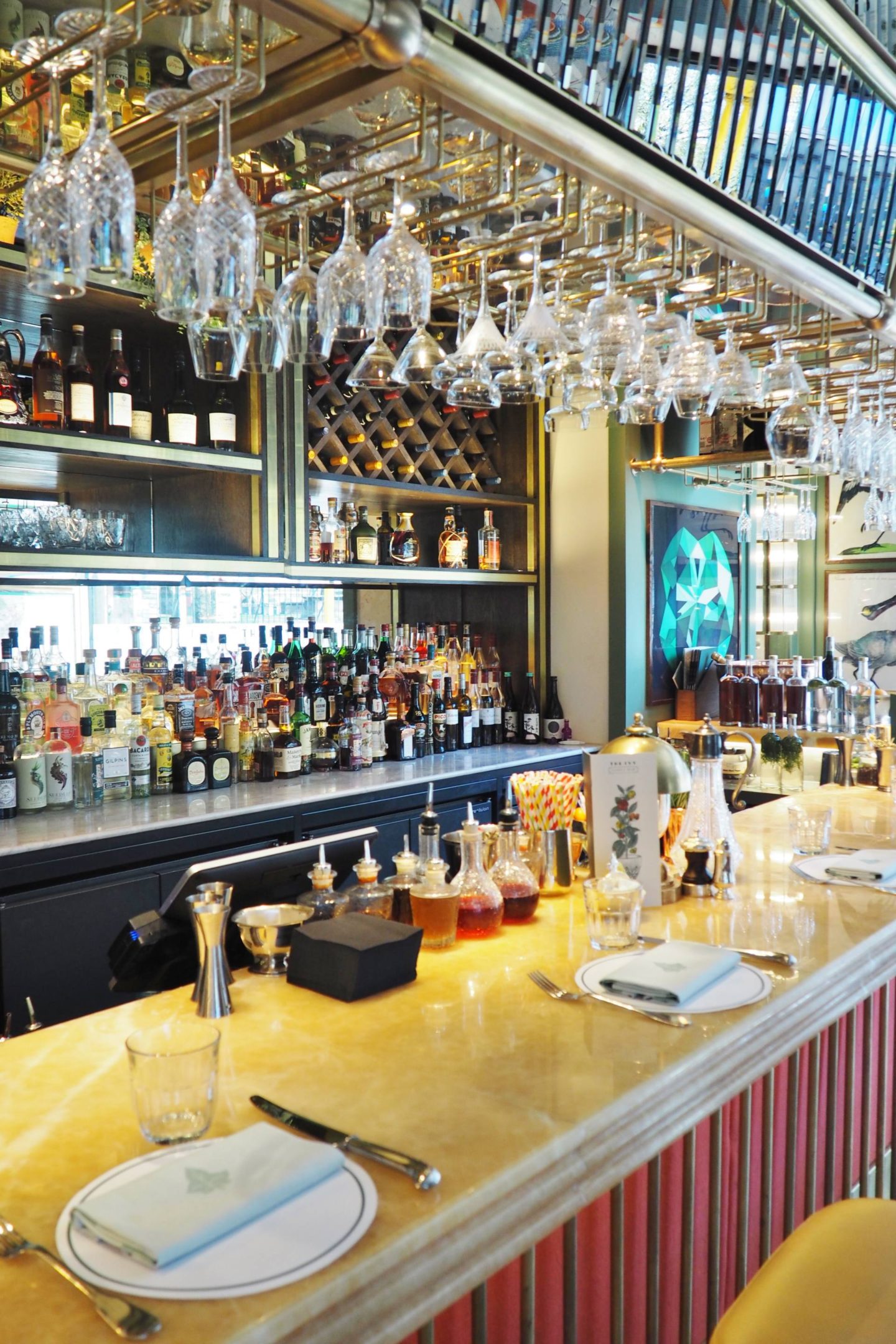 My overall thoughts on The Ivy? An ideal place to enjoy a decent British lunch with friends or family whilst sipping on elegant cocktails. The restaurant decor is very show-and-tell but you can only imagine what they spent on fixing the place up. Would I go back? Yes, but not in a hurry when there’s so many exciting openings in Birmingham. I wouldn’t rule this place out though if a friend was looking for somewhere ‘classy’ to have a bite to eat. Just make sure you prebook before hand if going with a large group, I’ve seen there’s been some issues with larger bookings.

Please note, I was invited to The Ivy Birmingham for reviewing purposes. All drink and food were free in return for honest feedback. Thank you for a great meal.

« One Night Stay At Woodward Lakes And Lodges, Doncaster

Getting A Good Night’s Sleep With Bach Rescue Night Products »