I feel useless calling myself a ‘food blogger’ sometimes. Especially when there are so many restaurants in the Midlands that I’m still yet (and dying) to try. I frequently forget there are also dinner places on the outskirts of the town square; those tucked away down side roads or hide away from main hustle and bustle of the town centre. But the question is, are these the ones worth visiting? I was invited to Itihaas by East Village PR for a night of cocktails, canapes and food and it was the first time I’d stepped foot in there.

Truth be told, if you were not intentionally looking to find Itihaas, I doubt you would even know it was there. Tucked away on the corner of Fleet St, it describes itself as ‘sleek and contemporary’ with sophisticated interiors. First impressions can mean absolutely everything to a food critic and on the contrary, as soon as I walked into the restaurant, I suddenly felt the place was very dated, full of dark, gloomy wood and what with the added sombre lighting, I was hoping I wouldn’t have to eat my food in the dark.

The blogger turnout was more than I’d expected and understandably we were ushered downstairs to another room. The room buzzed with bloggers mingling over champagne and cocktails and before long, various canapés had been thrust upon us to critique. I indulged in ‘just one more’ Tempura Cod canapé around 5 times before being seated for our selection of mains which I was excited to try.

Raj, the Executive Chef of Itihaas gave a quick speech about the restaurant and how certain cocktails were being paired to the meals. They introduced Torunska – a Polish vodka which I sipped a little at the end. Although our set blogger menu hadn’t detailed prices, I made sure to look at the menu online beforehand and I was flummoxed at how much the dishes cost. Starters – from salmon fillets, lamb chops to king prawns are priced anywhere between £12 – £17 alone. I wouldn’t usually pay that much money for a main course usually unless it was a spectacular steak or duck dish. Owing to the fact I have visited a fair few Indian restaurants in Birmingham over the years, personally I believe the Itihaas menu is overpriced.

Blogger menus were set on the table detailing the dishes we were able to try that night and I was curious to know how each blogger would sample each individual dish. Would they bring out one dish each, would that be too much? In good time (considering there were two long tables) a great selection of dishes were brought out for us to share around. The Lobster is simmered with five spices in a creamed mustard paste. Aside from the flavoursome taste, the only downside was the whopping £29 you would have been to pay, so in reality you would expect the lobster to be the best you’ve ever tasted!

There were a few moments of culinary wizardry, what with the fantastic presentation and several bursts of tantalised taste buds, however I do feel the overall meal was nothing to shout about. I appreciate the hard work that must go into each dish, but the only high point of the night for me was the Salmon wrapped in banana leaf (£15) which fell apart and melted in my mouth. As a self-confessed salmon lover, I will agree this dish tasted great, and the two salmon parcels that were combined with several herbs and spices were cooked well, but I expected to be blown away more by the flavours.

The garlic and coriander naans (£3) are cooked in a clay oven and came out piping hot to the table covered in a napkin. The Makhani Murgh (£15.00) consisted of butter chicken on the bone but it was another dish that didn’t WOW me. I think it would have tasted even better with a side of mushroom rice or some more cream! Unfortunately, as impressive as the dishes portray themselves to be – both through word of mouth and online reviews –  I still don’t feel the main courses live up to the hype of their ££ price tags. Portion sizes are decent but I wouldn’t order any of them again in a great hurry…

For blogging purposes, I also need to state it took three people to manoeuvre the plates around, just so we could get decent shots of the food and I had to put the brightness up on my camera to full! A few of us were sat with our backs to the main window which obviously obstructed any natural light from reaching our table. Unfortunately for me, I think I spent more time putting my phone light on to try and get a decent shot of the dishes rather than actually enjoying the food itself. From the very start, we have been asked to write an honest account of our experiences, so my critique would be that Itihaas needs consistent lighting – or a least a few more candles on each table to brighten the very dark atmosphere.

Desserts came out in just enough time to let mains slide down. As you will know if you’ve read my before, I’m a huge fan of creamy puddings so the Chai Masala Mousse,  a fluffy & airy milky mousse infused with Indian chai spices of cinnamon, cardamom & nutmeg served with an almond biscotti was pleasurable. The small dish costs £8. The Apple and Cinnamon samosas were a heightened version of the apple pies you could get from a well known food chain. But given the credit, were very tasty when warm.

At night’s end, I attempted a spoonful of the Sambuca Flame Gulab Jamun – dumplings doused in rose water sugar syrup, flambéed in Sambuca. Considering I haven’t touched the stuff since my 18th birthday, they certainly had a real kick to them. I really appreciated the invite to Itihaas to try their menu and given the chance to mingle with faces I haven’t seen in a while. It’s a little surprising I haven’t visited Itihaas before owing to its great reputation. Nonetheless, resorting to the cost that comes with each dish and the dark décor both upstairs and down, it might take a little encouragement for me to return any time soon. 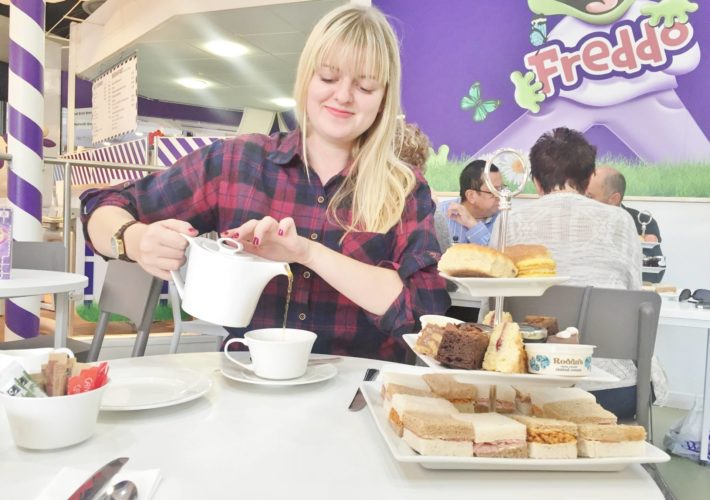