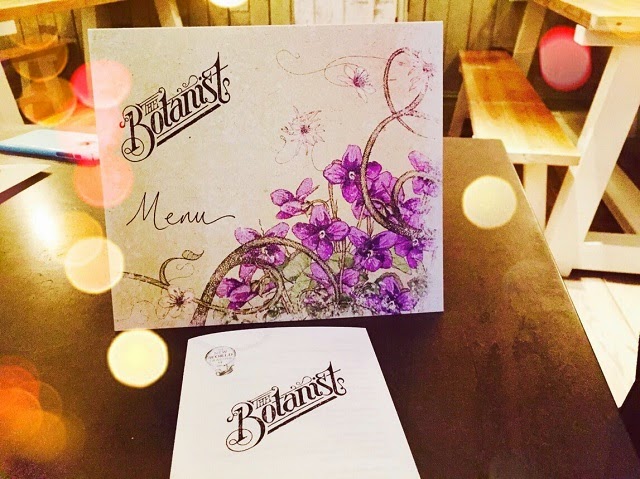 What kind of a person goes to a restaurant and cocktail bar THREE times before it’s even opened to the public? Me… that’s who! And I’m not ashamed to admit that I drank the cocktails every single time. The hype has officially arrived, and The Botanist has opened it’s iron gates to the people of Birmingham – but what do people really think about it? First impressions are everything and after walking in at 7pm on a chilled Wednesday night, past the outside garden into a sheltered terrace with comfy chairs and tables, I realised what the restaurant actually resembles… someone’s oversized greenhouse.

Under the decorative fairy lights and chandeliers (which dangle pretty low from the ceiling), if you look hard enough you’ll be able to spot chemistry sets, watering cans, beautiful mirrors, sets of keys hanging on the walls alongside picture frames filled with creepy crawlies at every glance. After visiting multiple times already, I have realised there really is something new to discover every time you visit.

What we mustn’t forget is that The Botanist is actually a chain restaurant, and has already cropped up in places such as Manchester, Leeds and Newcastle. We all know that chain restaurants can become a little ‘boring‘, especially when looking for somewhere new and interesting to eat. I am really hoping that this restaurant/cocktail bar stays as the new ‘quirky’ place it appears to be, as it would be a shame for it to lose its appeal so quickly. I really admire the setting though, I feel it’s perfect for a date!

Unfortunately, I drove on the night so I couldn’t destroy the cocktail menu as I had hoped. However, I did ask the manager which is the ‘best cocktail’ on the menu and I had unknowingly ordered it at the start of the night. Apricot and Mint Daiquiri, consisting of rum, liquor and sugar syrup is bar far the tastiest I have tried so far. I suggest randomly choosing a cocktail with your finger on entry, because otherwise you’ll be there for hours, as the cocktail menu is just a touch overwhelming.

The Botanist has been labelled as ‘a concept like no other’, which offers an tantalising selection of botanical cocktails, ales, champagne and beer. The food is inspired by rotisserie and BBQ flavours, and the menu boasts a vast selection comfort foods. I really liked the open kitchen where you can see the chefs frantically cooking your meal. I really didn’t expect my mushroom starter to come on a shovel however, but I thought this was a unique touch. Some people would absolute hate the presentation, whereas others would thrive from it. How amazing is that pate and chutney in the wheelbarrow though?

The best part of the meal was definitely my hanging chicken kebab. I sensed that The Botanist had a few minor teething problems to begin with as the chicken was a little overdone, but the sweet chilli and garlic which drizzled down the pole onto my chips at the bottom won me over. I would definitely recommend this as a meal, as it also comes in lamb and halloumi style dishes if you fancy something else.

~
I am only going to say this once. The chocolate fudge cake and ice cream at the end of the night was one of the best desserts I have EVER eaten. Even though my waistline was bulging after such a hearty meal of kebab and mushroom, I scoffed this down in no time. It’s such a filling and creamy dish and I whole heartedly recommend this after your meal. Trust me when I say, you won’t be disappointed!

On my second visit just three days later, I opted for the fish cake for stater. All of the dishes are well presented, and my boyfriend’s BBQ chicken wing starter came in a wicker basket. I expected the wings to be slightly more coated in sauce, but it came in a little pot on the side. Looks appetising though, right?

Sometimes you sit on benches, sometimes you sit on chairs. Either way, I can assure you’ll have a blast if you ever decide to visit The Botanist on a night out. I have dined there twice and drank there thrice in the space of a week. Although the second time didn’t completely blow me away (as the gas apparently got blown out!) – the waitresses are really cutesy and cater to your every need and the prices are just about right for what you get. I’ve read good press about about the place, and for good reason. I’ll more than likely be returning in a couple of weeks to have at least five more from the cocktail menu and I’m really jealous of all the people who get to go after work! To see more, visit The Botanist for a prices.

Please note: All food and drink were complimentary on my first visit. I was not asked to write a review but I have given my honest opinion.  The Botanist: 16 Lower Temple Street, Birmingham, B2 4JD


Took a morning stroll up to Bournville this mornin

Ad / In our house we are always thinking of ways w

Sunday starfish 🌟 Seb slept from 11PM – 6AM and

I’ve just had one of those moments. They only co