What I ate at Chung Ying Central:

They say ‘you are what you eat’. If that’s the case, I’m 80 percent Chinese. The funny thing about me is,    I spend a lot of time thinking about what I’ll be eating for my next meal (the most part of me wishing it’s Chinese food). So when I was asked if I would like to come and try a new Oriental restaurant, Chung Ying Central, my main concern was thinking whether it was appropriate to order the entire menu…

Chung Ying Central opened its doors in 2013 on Colmore Row and is highly rated for the Dim Sum. During the week, they offer Express Lunch options which has so far proved popular with local offices. Arriving shortly after 6pm on a Friday night, the rush of ‘happy hour’ was pulling in crowds of customers and their buy-one-get-one-free cocktail menu was proving to be a success. Lucky for us, the manager James Wong happened to be in the restaurant at the time of our visit and happily came to our table to take our order and have a chat about the restaurant. He recommended the Dim Sum (of course) and a speedy 15 minutes later, I was sat with a cocktail in hand, ready to eat some pork-based Shanghai Dim Sum and Salt & Chilli Chicken Wings for starters. In all honesty, I wasn’t keen on the Dim Sum dish. My taste-buds weren’t adapting well to the flavour. I think it’s the texture I don’t find too appealing. 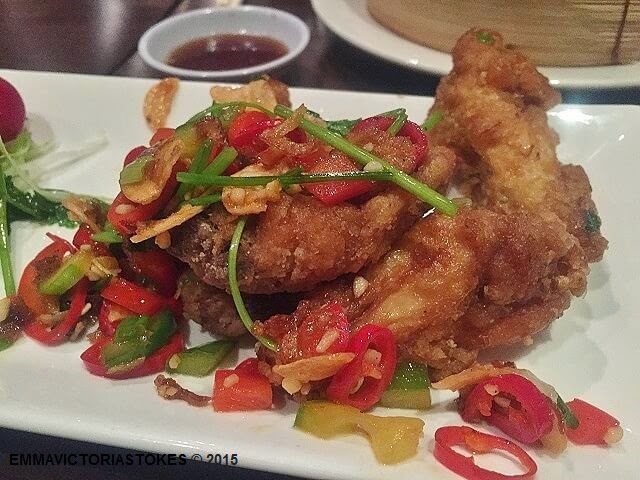 As for the chicken wings, trust me when I say, they were more delicious than they look. They weren’t overly spicy, albeit covered in red and green chillies. They had a subtle crispiness to them and were incredibly moorish. They came out served piping hot on a crisp white plate. I’m known to be mucky pup and love ripping meat off the bone – so if you do too, I would highly recommend these for a starter.

Upon arrival, I was kindly asked if I would like to try one of the house cocktails. I always like to drink something sweet with my meals, so I opted for the Aviation Cherry Blossom: Bombay Sapphire Gin, Cherry Liqueur, Lemon Juice and Maraschino Cherry Syrup. My choice was a strong one and I noticed my face kept squishing up like I had sucked on a lemon – a perfect choice for a Friday night cocktail. Unfortunately I didn’t get to try any others as I was driving, but I’ll most definitely be back for more. 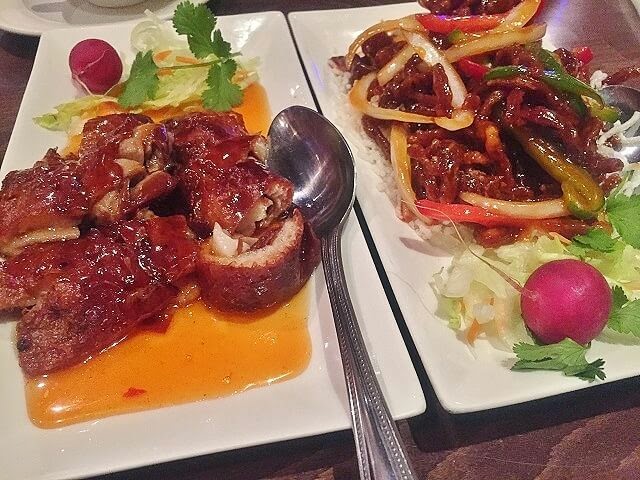 The kitchen is speedy and we received our main meal shortly after. We chose very hearty and filling orange dishes, but this didn’t stop us consuming the majority of our duck and crispy beef. The duck was indulgent, and the skin dripped in a tangy puddle of plum sauce. The meat was tender and easy to cut through and was served to perfection. For me, it was the winning dish of the night. As for the crispy beef, (one of my all-time favourite sides) it was smothered in peppers and onions and had a gentle crispiness which worked perfectly with the tenderness of the duck. We also ordered the Prawn noodles which I could barely eat after being consumed by the spare ribs which were also brought to the table. 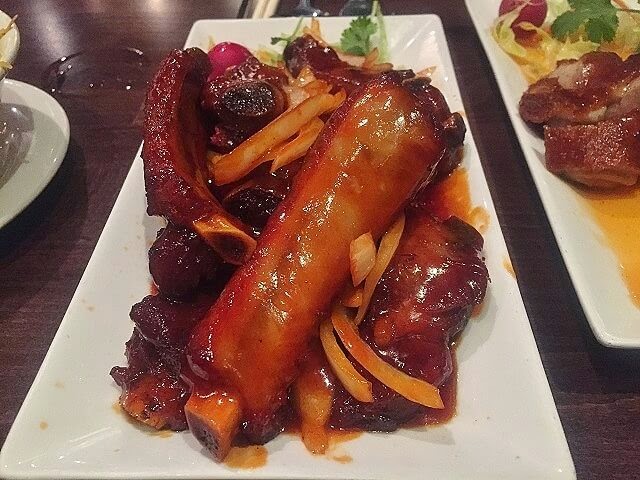 Anyone who knows me, knows that Spare Ribs is my ultimate favouite meal. So when the Peking style dish was served to us, I chomped down on as many as I could. The ribs were especially delicious as the meat fell easily off the bone and the ratio of sauce was not too overwhelming. The picture doesn’t really do the ribs any justice, but believe me, you’d be an idiot not to order these too on the side…

We demolished as much of the six dishes as we possibly could before having a casual chat with the manager before leaving. The overall atmosphere of Chung Ying Central leaves you feeling that it isn’t a place to go for that ‘expensive-over-the-top’ meal, but is a truly wonderful experience for a Friday night/ midweek feast. The majority of customers at the bar disappeared after 7pm when happy hour ended so the place appeared pretty quiet afterwards. However a large quantity of tables were still full of customers when we left, which speaks volume. Chung Ying Central is doing extremely well for itself, especially since being out of the way of China Town. The dishes aren’t the cheapest of meals, as the crispy beef alone is priced at £12 – but I would say it is a genuine oriental restaurant which delivers at an incredibly high standard. To see more reviews and full menu, visit the Chung Ying Central website.

Please note: All food and drink were complimentary. I was not asked to write a review but I have given my honest opinion. Chung Ying Central: 126 Colmore Row, Birmingham, B3 3AP

The Meat Market, Covent Garden And The Book Of Mormon » 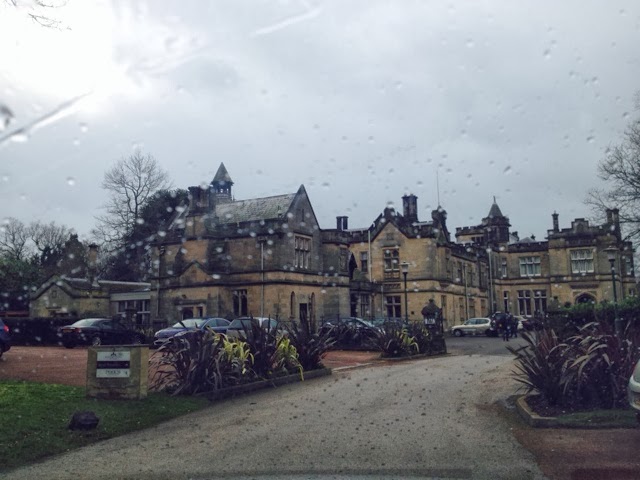 It’s pretty great when your boyfriend cooks a cr

We used our hour of freedom yesterday to wonder Co

Friday night feast (at home) thanks to @originalpa

Enjoying some sunshine with my little Cabbage Patc

Bringing the outside in. Also desperately need som

AD - GIVEAWAY WINNER! 👏🏻 Thanks to everyone